What is MHD beyond XDS-on-FHIR?

I have been working on a Profile in IHE now for three years. It normally doesn’t take this long, but in my case I had the good luck of being the in the right place at the right time. I saw the tidal wave of “HTTP RESTful” coming, felt it strongly back when I was on “The Direct Project” creating a sub-optimal solution. At that time, IHE only had the XDS solution, which is based on Web-Services using SOAP, SAML, and ebRegistry. This XDS solution was and is still the best solution for business-to-business. However this solution is very hard to use if one is using programming tools more common on lightweight systems such as Mobile.


So back in 2011 I wrote the first profile in IHE that was targeting ‘ease of use by lightweight application platforms such as Mobile Health Applications”. Thus it targeted use of HTTP RESTful, using JSON encoding. The Mobile Health Documents (MHD) profile was born to provide a more simple API to an XDS environment. This happened to be the same timeframe that Grahame was fanning the FHIR flames. So we joined forces and brought the concepts needed for XDS into FHIR®. So now, I take those FHIR based Resources and re-write the profile.

Note there will be yet-another re-write (hopefully just tweaks) this summer after HL7 completes their DSTU2 ballot process. There are a set of gaps identified this winter that we have fixed in the proposed content for DSTU2.

The Mobile Health Documents (MHD) is the result.
I am not going to go into deep details, but take the perspective here that the reader is a FHIR expert, and wants to understand this MHD profile. I will assume you also have some understanding of XDS, but only as an overall concept.

The basics are shown here. The MHD abstract actors are:

The MHD abstract transactions are:

As and API to XDS environment

This is what is mostly talked about, but this was just the master pattern. The functionality provided is a more simplified API to a backbone that is fundamentally based on XDS. This simplified API is based on the HL7 FHIR RESTful API. It is therefore available in simple XML, or JSON. The elements of the metadata are thus more accessible to a Java Script application.


As an API to XCA environment

As a standalone Document Sharing infrastructure

Similar to XDS or XCA, but without the need for XDS or XCA on the backend.

As an API to XDR environment 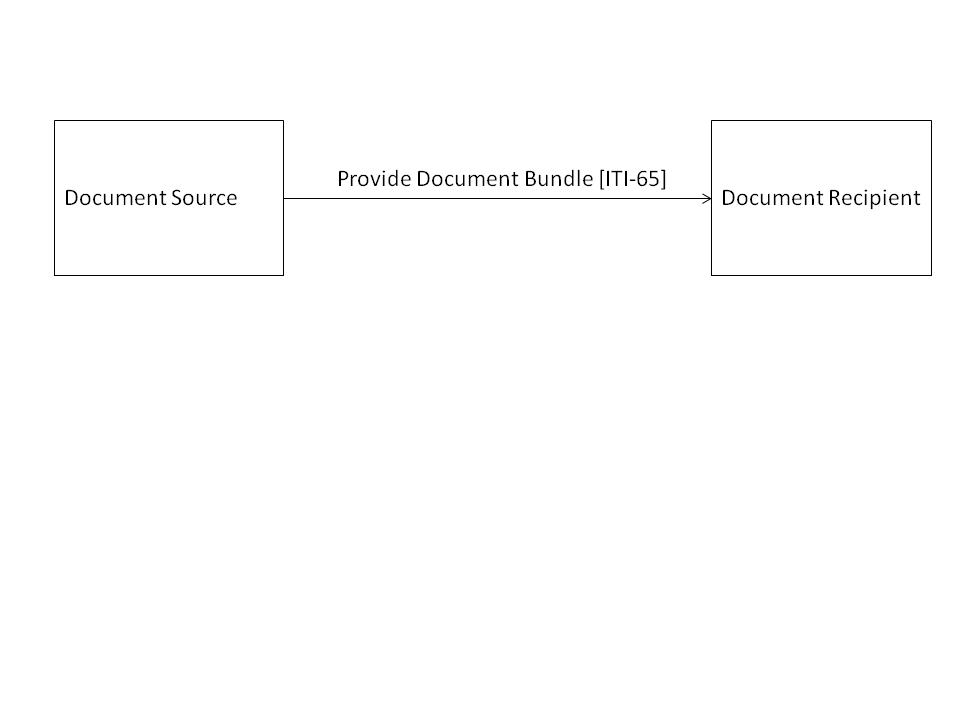 Either end of an XDR could be implemented


As a standalone PUSH environment

Similar to XDR without XDR. Use your imagination that everywhere XDR might be used, the MHD Document Source to Document Recipient could be used.


As an API to the Direct Project HISP 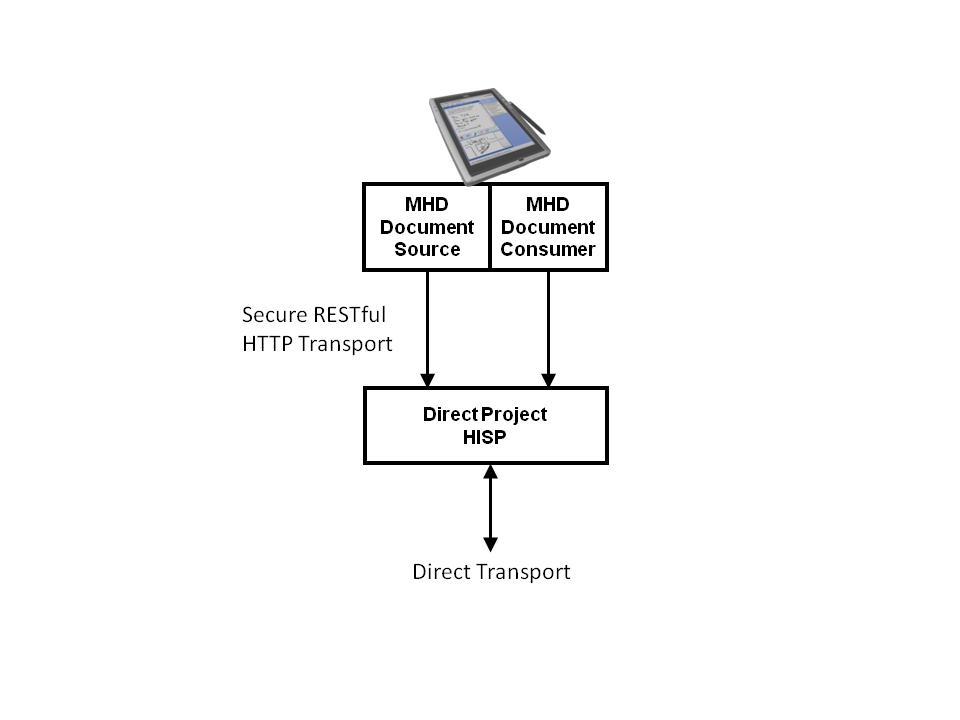 Either as PUSH based API, or including support for Query side interaction. The Direct Project is a secure email protocol for pushing documents from one place to another. There are value-add service providers that provide a hosted environment for this. They offer a few different APIs to their hosted service. Some are the secure email, some are based on XDR, some have their own HTTP REST API. These could be augmented through the addition of the MHD API as the front-end of the HISP.

As an API to any document based system

The backend just needs to have a document concept


As simply a profiled FHIR service

At the IHE Connectathon we showed that Document Sources and Document Consumers could just direct their API toward FHIR Servers and it would simply work. 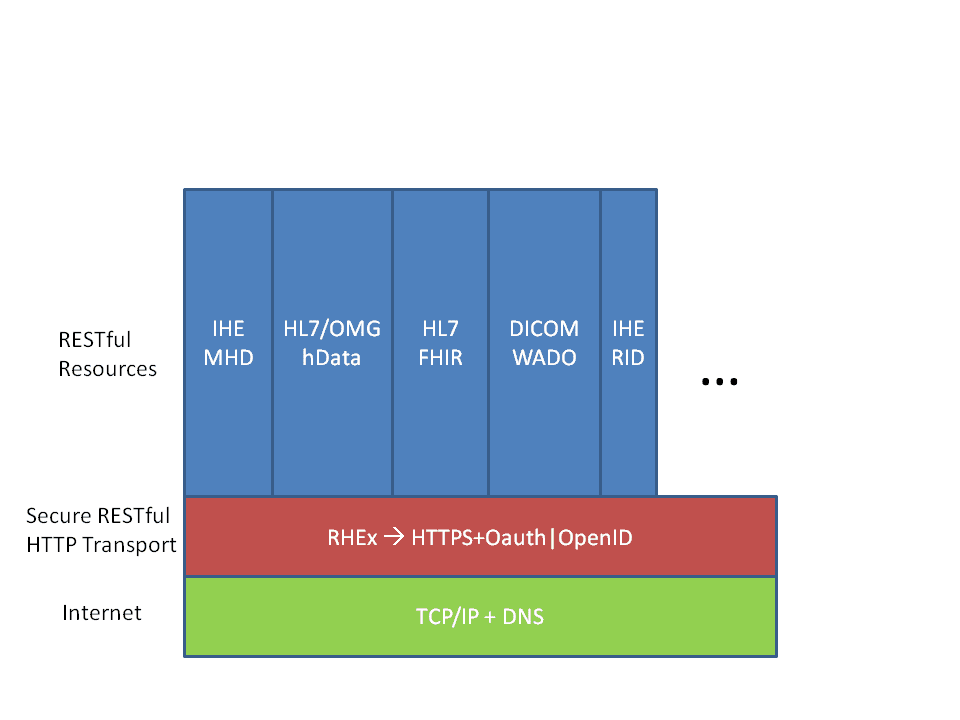 As with any Interoperability API dealing with Healthcare information, Security and Privacy
are important. IHE doesn’t mandate a specific Security or Privacy model, as that would be Policy. But IHE does encourage the use of ATNA, and IUA.This also described on the FHIR Site on the Security page.

Most worrying is that there is a lack of standalone implementations, that is vendors that specialize in Audit Record Repository functionality. I know these exist, but they don't show up on the search.

It is very important for the success of the IHE process that vendors publish their "IHE Integration Statement" on the internet. This is not just true for ATNA, but for all Profiles.

I expect that my blog followers are the likely audience to be these Implementations, or at least those that know some. So I ask that if you have an implementation of the IHE ATNA Audit Record Repository, please post a comment on this article that points at your IHE Integration Statement for that product. I am fine with you explaining your implementation capabilities in a few sentences, but please don't make me regret this offer.

If you know of an ATNA Audit Record Repository and don't see it show up, please let me know. Or better, let THEM know.
1 comment: