ACME is not appropriate for Heathcare use

The ACME protocol is the standardized variant of "Lets Encrypt" certificate issuance. This is NOT appropriate for healthcare use, as this model of certificate management is primarily intended to make the process of server identity proofing as fast as possible. The intended result is that more web servers would support TLS encryption, with the restriction that there is no authentication of the identity proofing.

This is very counter to the use of certificates and TLS in healthcare as recommended by IHE-ATNA profile. The ATNA profile specifically focuses on mutual-authentication using TLS to a locally known trusted authority. In this profile we explicitly explain that this model should NOT use the certificate store that is managed by web-browsers. This ACME model weakens even the web-browser certificate management.

I get the following question about every other month. Here is the version I just responded to:

In this project I encountered a requirement to use SHA-256. Apparently this was in reaction to the SHA-1 collision vulnerability (https://shattered.io/) from late 2017. IHE XDS requires the hash to be SHA-1. Have you heard of any requests to change that?


There is no requirement in IHE that a Document Consumer must check the size+hash against the document they have received. This would be a policy choice. This is a policy choice that IHE does enable. That is to say that IHE includes a requirement to set the size/hash value to enable this downstream check.  The main reason to not mandate it is that there are few cases where the normal transport, especially TLS, doesn't already confirm integrity. If we added mandatory check of the hash/size, then we would need to express what must then be done if a failure is detected. 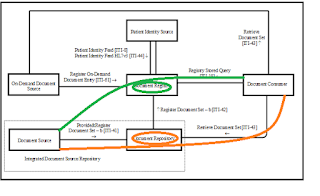 In the most distributed configuration of XDS there is one Registry managed centrally, and many Repository servers maintained at each of the custodians of the documents. The kind of errors this can detect are errors such as bit loss while in storage, encoding loss due to errors in encoding algorithms, or transport failures due to multiple hops or intermediary.

The other transport options in the Document Sharing (XD*) family are less distributed, but the metadata is always separated from the Document itself.

The failures of sha-1 are all specifically failures to detect attack by a malicious and well-funded attacker. The failures of sha-1 are not the kind of failures that would randomly happen due to technical failures.  It is important that one recognize that XDS mechanism is both a sha-1 hash and a size. So an attacker must get a sha-1 collision without changing the size of the document. A determined attacker will just replace the hash/size elements in the Registry, for which this kind of successful attack would not matter if the hash was sha-1 or sha-256.

I emphasize that the size+hash is a mechanism that leverages the fact that the metadata (DocumentEntry) traverses a different pathway than the Document. They both are managed in different systems. So the intention of the size+hash is to detect technical (accidental) failures in these various systems and interconnections.

The metadata size+hash is not a high-security mechanism. If one is concerned about malicious acts of deception, then one must use Document Digital Signatures.

Document Digital Signatures would use SHA-256 (or better), and also have timestamp, purpose of the signature, and are counter signed by a verifiable identity backed by a certificate chained to a certificate authority that manages trust and revocation status. Without the signature across the hash, and a timestamp, one does not know that the digital signature is valid.

So if an organization is really serious about digital signatures, then they should be mandating Document Digital Signature. Further, they must then make a clear policy on what Document Consumers must do, Such as when is it mandatory to check the signature, what is to be done if there is no signature, what is to be done if certificate revocation checking can't be done, what requirements of timestamp are necessary.

Good for Intended use

The HIPAA Accounting of Disclosures is obsolete and dangerous.

The Patient's choice of applications should be rather open ended, today. This eventually will become more constrained, but during this wild-wild-west time for healthcare applications we simply don't know enough about the potential good or bad that these applications might cause. I am sure there will be a set of these applications that are out-right-dangerous. I encourage us being open at this point because any rules we might put in place might inappropriately restrict good applications. With a few years into the future we will have a much better idea of how a community evaluation can help keep patients safe.

But just because I think we should be open with allowing the applications, does not mean I trust them...

One small step that I would like to promote is that the healthcare provider that holds data on a patient MUST record all accesses to that data, and provide the patient visibility into that audit log. This is specifically recording of the API access requests made, and if they were successful or rejected. It is important to record the rejections and the successful transactions. It is also very important to record what was requested and what security token identity was used.

For the most part this audit log would be just the FHIR API "REST" activities.

The Access Log as I am speaking about it here is just the log that is maintained by a Healthcare data custodian, about the API accesses to the data on that patient in the control of that custodian. Where a Patient has many data holders, the patient would need to get a comprehensive audit log by gathering the audit logs from each of the custodians that they have data at.

Log analysis is not something that I expect that a Patient would know how to do, but once we have agreement that each Custodian would maintain a FHIR AuditEvent log of API access; then we can mandate that the custodian also provide a FHIR AuditEvent API access to that audit log. Once we have an API to the AuditEvent log of API calls; then someone can write Application that gathers the audit logs together and does analysis. This analysis would do typical audit log analysis looking for patterns, getting approval of a well understood pattern. Once well understood patterns are identified, then the application would alert the Patient when an unusual pattern is seen.

The IHE ATNA profile has been updated with full support for FHIR AuditEvent; so this is a really good specification to support this model.

For those that struggle with the way that IHE documents the specific requirements of audit logging per type of security event or per ITI transaction; there is an easier tool. The IHE Gazelle "Security Suite" Tool has each audit log message broken down and explained.

My hope is that soon this tool is the way that IHE documents the transaction patterns, so that the supplements and technical-framework documents no longer have the ugly tables.

Here is what shows for the IHE ITI-2 User Authenticate Login message: 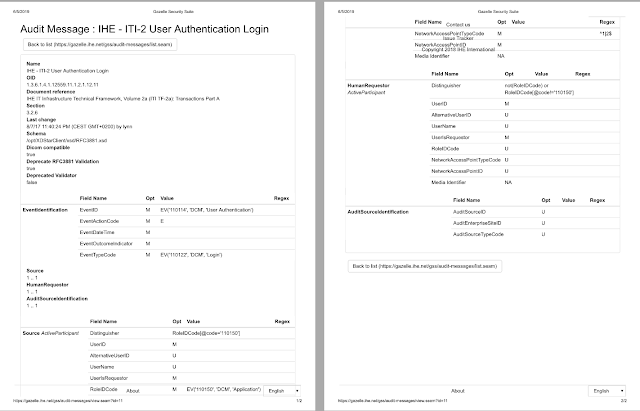 The Gazelle tool is also used for Testing...


There are also a specification page for EACH of the other ITI transactions. For example (They are ALL in the Gazelle tool, so go there and see them all):