I was made aware of an open-source project that has addressed converting classic DICOM Audit Messages into the new FHIR AuditEvent. This open-source project is managed on this github repository. I helped the authors with some background and understanding, but I take no credit for the work they have done.

I am sure they welcome comments, suggestions, and assistance.

My blog articles on Audit logging for Security, Privacy, and others

The Patient Maser Identity Registry is a new profile (Implementation Guide) from IHE. It is designed to address a new environment that has no existing HL7 v2 or v3 patient identity management solution, that needs a multiple organization Patient Identity Management. It defines the following actors. This is the typical IHE model of defining abstract actors, not systems. Thus these actors can be grouped in various ways inside a system that one might more typically understand. 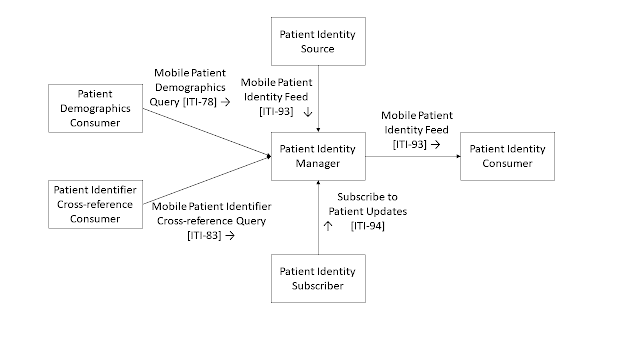 The following shows the flow of these systems

First shown is that a Data Source (a typical FHIR Server) would subscribe to be notified.

Second shown is a flow at a Registration Desk

This solution is not expected to work everywhere. It is designed for environments that don't have existing Patient Identity infrastructure, and it is designed for places that want to manage a master identity (golden) at the center of multiple organizations.
I do expect that variations will eventually be worked up as well.