Profile Proposal for 2013 development in IHE ITI
This is a profile proposal that the IHE ITI committee will most likely take up in the 2013 timeframe. This is just a proposal so input is important as well as support from those interested and those with experience. Note I took liberties with the name, the author has called this "OAuth for HTTPS access". I simply think that this new title puts this new profile in the family of Enterprise User Authentication, and Cross-Enterprise User Assertion. Plus I don't like putting technologies into the title of a profile, actually don't like the solution to lead as the problem should be the point of the profile. This will next be discussed at the IHE ITI Technical Committee meeting in December at the Mitre offices in DC. The rest of this blog post is the  Detailed Profile Proposal unedited (note, I think OAuth 2.0 [RFC 6749]) is now released, See the IETF OAuth status page

Summary
The HTTP based transactions, like those in MHD, need authorization services as part of their security environment. OAuth and Kerberos are examples of such services. Kerberos is used within enterprise, but is not accepted for cross enterprise use. OAuth is being used and extended for such use.

There is already a market for authorization services in the commercial environments on the Internet. Early versions of OAuth 1.x are in use by Google, LinkedIn, Facebook, and other well known providers. Experience with this has driven creation of a new version of the OAuth standard that can be profiled for different use environments. OAuth 2.0 is not complete in itself; it must be profiled to meet the needs of specific market segments.

IHE has the expertise in the needs of the healthcare market, and is structured to create profiles of existing standards. This should mesh well with the structure and methodology of the OAuth 2.0 standard. By using the same standards as the commercial sector, we increase the acceptance of the healthcare profiling by commercial authorization providers.

Providing an authorization mechanism as a profile that can be grouped with MHD and other RESTful profiles will enable their use in the anticipated deployment environments.

Use Cases
The following five use cases will be considered initially for profile purposes. This is not an exhaustive list and one of the early tasks of this project will be re-examination of the use cases to combine those that are duplicative and add those that are considered appropriate. (Appropriate additions will motivate and explain additional requirements on the protocol beyond those already driven by these use cases. There are far too many different potential use cases to accept any further use cases unless they reveal new requirements for authorization services.)

All of the existing standards follow a very similar transaction pattern. The diagram below uses the terms from the OAuth standard, but the other standards fit this diagram with only the names of the transactions and actors changed. 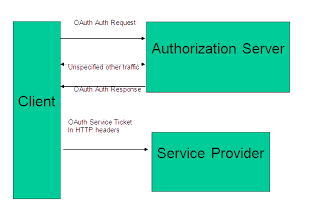 The Client will make a request of the Authorization Server. There is may be other HTTP traffic involved as part of the authorization process. This traffic might not be specified in detail by the authorization profile because they are provider specific. The result is an authorization response providing a ticket of some sort that can then be used in communications with the Service Provider.

The client will use that ticket, and perhaps other related information, in the HTTP request headers to inform the Service Provider that it is authorized to make this transaction.

Standards & Systems
The most likely candidate standard is OAuth 2.0 http://datatracker.ietf.org/wg/oauth.

Other standards candidates exist, but none of these has gathered significant acceptance in the cross enterprise environment:
The OAuth 2.0 standard is a framework that is not in itself complete. It is expected to be profiled to meet particular use case needs.
Technical Approach
All of the candidate standards take a similar approach. They match the transaction flow shown above. The ITI effort will not invent new methods. It will profile an existing standard for authorization. We do not expect widespread acceptance if we invent a new method.

(It may be that after review we will decide to use options rather than grouping to accomplish this function. For now, we will proceed assuming that the grouping function will be used to document the behavior.)

Impact on existing integration profiles
HTTP based transactions like MHD may need to have options added so that implementations can indicate the ability to perform and use authorizations.

Breakdown of tasks that need to be accomplished
The major work items to be performed are:
Risks
None of the long existing standards has reached widespread acceptance in the cross enterprise environment.

The OAuth standard is still in draft form. Publication as a draft standard is expected in mid 2013. The previous version of OAuth had a number of different problems, although these did not prevent adoption. They did result in different vendors making choices that substantially reduced interoperability between different authorization servers. This made it difficult to support multiple authorization servers for a single service provider.

Working with a draft standard poses risks, but in this case also provides advantages. Since the intention is that the OAuth 2.0 be profiled, feedback from our profiling effort can be used to improve the OAuth 2.0 finished result.

We do not know whether the OAuth 2.0 approach will work and meet with widespread acceptance. The proposal is already the subject of considerable controversy.

There are other less mature standards development activities that claim to be addressing this same problem. They are all significantly behind the OAuth effort in terms of readiness.