Metadata often results in meta discussions. Unfortunately these discussions are simply fun, and not productive. There are far too liberal understandings of metadata, especially in the S&I Framework Data Segmentation for Privacy, where there is a flat bucket of any describing attribute without recognition of purpose or how/where it will be used.

The Purpose of Metadata
Metadata is associated with data to provide for specific data handling purposes. These domains of data handling purposes fall into some general categories. Each metadata element typically has more than one of these purposes, although there are some metadata elements that cover only one purpose. It is important to understand these domains of metadata purposes. Often sited PCAST report did identify Patient Identity, Provenance, and Privacy; three good purpose categories but not sufficient. I have covered this before, but revisiting it because of HL7 work on metadata and IHE re-documentation of XD*.  For example here is a view of the metadata purposes in Document Exchange models, such as XDS/XCA/XDR/XDM. 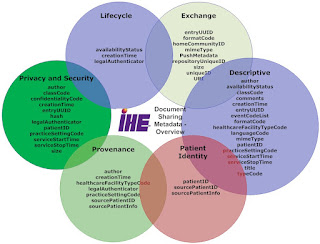 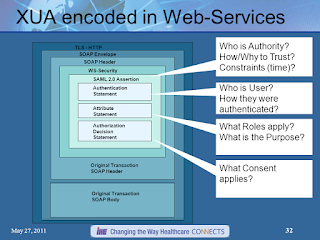 Another layer that is often confusing is the Privacy and Security layer. As indicated in the metadata model above there are some metadata elements that are specifically metadata that are there (purpose) of being used to protect privacy and security. The most referenced here is confidentialityCode; but also dates of service, individual author, author institution, class of document, as well as the patient and document ID themselves.

Dublin Core
I looked at Dublin Core, which is often cited as a Metadata definition with abstract model…Dublin Core defines 14 categories. It is interesting, and should not be ignored. I think that Healthcare has matured beyond Dublin Core, not to say that Dublin Core is immature but rather that we have identified specific needs of metadata to our industry. Similar to how Video files have metadata defined that are beyond Dublin Core. Healthcare should show traceability to Dublin Core, but not more than that.
Conclusion
IHE has a good set of metadata, it is not formally modeled abstractly; I am working with IHE to do this modeling as an effort to better communicate with the IHE reader. HL7 is working on metadata, but this work is far too tied to functionality triggers. We are not done, but we are moving in the right direction.

Update:
May 15th - Added back in "Routing", I had removed this thinking I could pack them into Discoverability. But it just doesn't work out. Later changed "Routing" to "Exchange" as it really is the characteristics needed to successfully exchange. Added a diagram showing how the XDS metadata can be shown in this topology.
May 16th - Updated some text and image for readability.