In my last article I outlined the need to recognize that health data have various kinds of sensitivity, which informs various types of Privacy rules of access, to support the goal of Privacy. Thus Data Segmentation for Privacy (DS4P). Here I am going to explain some current thinking of how an Access Control Enforcement engine can tell sensitive data from normal health data.

Access Control is broken into various parts. One part makes an access control decision. This is made based on possibly many vectors. Please read this article on Vectors through Consent to Control Big-Data Feeding frenzy. It explains that some data is sensitive simply because of who authored it (Betty Ford Clinic), which is clear by looking at the author element.

The problem I point out in the last article is that differentiating sensitive data from normal data is not easy.

Back 20 years ago, there seemed to be an expectation that when a clinician recorded some fact, they would also tag that fact with a sensitivity tag.  Thus when an access request was made these tags could be inspected by the access control engine to determine if the data could be accessed by the individual requesting access. The reality is that this tagging at authoring by the clinician was unreasonable and never done. The reality of the time was also a more simple time.

Thus there are large databases of longitudinal data that has never been assessed if it is sensitive or not. How would one enforce Data Segmentation for Privacy (DS4P) if there is no way to identify what data needs to be segmented? 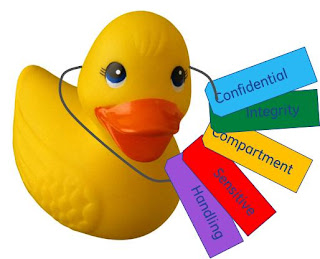 Thus the Security Labeling Service (SLS) was born. This service does what the name indicates:  given a bunch of data, it applies security labeling.

The capability might be gross or fine-grain:
There are likely more, but this subset seems foundational.

The SLS might operate on a single observation, a Bundle of Resources, a CDA document, a FHIR Bulk Data blob, or a whole database.

How does the SLS work?

The reason to create the concept of the SLS was to isolate the hard work of determine the sensitivity from the Access Control Decision and Enforcement. Thus us privacy and security experts were explicitly invoking the Hitchhikers Guide to the Galaxy:  "Somebody else's problem field". Which means, I don't know how it works....

One idea is that Natural Language Processing is used

One idea is that Big Data and Machine Learning is used

I am sure someone would indicate the Blockchain is used

Most likely many methods are used. It depends on the needs of the organization, data, and patients.

To modify the data or not

I tend to not want the Security Labeling Service (SLS) to modify the data. Mostly because the kind of function I want out of the SLS is simply to identify the sensitivity kinds. These sensitivity kinds of data are not typically exposed to end users or recipient organizations. They are just used by the Access Control Enforcement to determine if the data should be allowed to be accessed, blocked, or modified. Thus any changes to the data would happen by the Access Control Enforcement, not the SLS.

A model is to scan the data when it is created/updated, and save the assessment made at that time with the data. This model is optimizing for doing the assessment as minimal as possible. But this model can end up with an incorrect tag as the concept of sensitivity changes over time.

This model could be enhanced by scanning the whole database again when sensitivity policies change. This likely can be done with a low priority thread, so would have minimal impact.

The advantage of predetermining the sensitivity is that one could then do queries that include queries of these sensitivity tags. This might be useful, or might be seen as an invasion of privacy.

I tend to place the SLS at the point of Access Control Enforcement. I prefer this as the nature of health data sensitivity is very contextual. The sensitive topics change over time, the nature of the sensitivity changes over time. The context of the request might also affect the decision.

It is possible that the SLS is invoked by the Access Control Enforcement, and it is intelligent enough to notice that the data is already pre-assessed, thus just returning that pre-assessment without doing any work.

This would benefit from knowing how old that pre-assessment is. The age might be encoded as a custom security tag, for example a tag that simply indicates when the assessment was done, likely the policy version that was used. Another method might be to look for Provenance of the prior SLS update.

So the SLS role is to somehow tag the data with kinds of sensitivity it represents, so that access control enforcement can support Data Segmentation for Privacy.

Here is a sample of how this is engaged

FHIR Chat stream on this topic